Most product pricing are NOT updated due to the international travel ban. Please check updated info with travel consultants.

Recommend now and get your starter credit.

Splendours of Egypt & The Nile with Uniworld

Cruise the Nile in a manner once reserved for queens and pharaohs.

For 12 adventure-filled days, experience Egypt and the Nile’s most wondrous sites in style and luxury. Set sail on an eight-day voyage onboard the all-suite River Tosca. Wander amongst the towering ruins of the Temple of Karnak, the world’s largest ancient religious complex, and the entrancing Temple of Luxor. Visit temples dedicated to Hathor, Horus, and other mythological figures, and pay homage to the country’s first female ruler at the Temple of Hatshepsut. Follow in the footsteps of renowned scholars and explorers as you venture forth into the Valley of the Kings, the ancient burial grounds of Egyptian royalty. You will enjoy an exhilarating ride in a felucca, a traditional Nile River sailboat.

This captivating itinerary begins and ends in Cairo, where you’ll visit the famous Egyptian Museum and its stupendous and unrivaled collection of pharaonic artifacts, including treasures recovered from the tomb of King Tutankhamun. Journey to Giza to gaze upon the mighty ancient Pyramids and the timeworn, enigmatic Sphinx—iconic images that continue to amaze.

An enchanting land of marvels, myths, and wonders old and new, Egypt is an extraordinary destination no culturally curious traveller will want to miss.

2020 cruises will be on the new S.S. Sphinx
The S.S. Sphinx will make her debut on the Nile river on January 4, 2020. As the only luxury river cruise ship in Egypt, S.S. Sphinx will offer three gourmet dining venues, including a private dining room and an al fresco dining experience on the upper deck, a swimming pool, massage room and 42 gorgeously appointed suites. Egyptian artwork, fabrics and hand-carved furnishings will bring the beauty of the region to life onboard.

* All prices quoted are PER PERSON based on twin share in Australian Dollars and include taxes, fees and port expenses (if applicable).  All prices quoted are for the cruise departing on 25Sep21. Certain departure dates and embarkation points may be at an additional supplement. For more information please contact one of our Travel Specialists.

*Rates are subject to availability and changes without notice. Rate are based on the lowest available and may differ at time of booking. Other travel dates may be available at an additional cost.
For more information and other conditions please confirm with our Travel Specialists at time of booking. 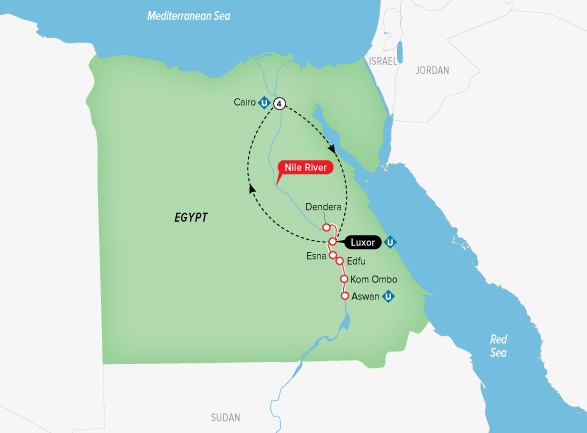 Note: The itineraries presented are subject to modification due to water levels, closures because of public holidays or other uncontrollable factors. Every effort will be made to operate programs as planned, but changes may still be necessary throughout the cruise. This day-to-day schedule is subject to change. Your final day-to-day schedule will be provided onboard on the first day of your cruise/tour.

Arrive at Cairo International Airport. If your cruise/tour package includes a group arrival transfer or if you have purchased a private arrival transfer, a Uniworld representative will be on hand to greet you and escort you to the opulent Four Seasons Hotel Cairo at Nile Plaza.

The ancient quarter of Cairo is intense—the colors, the sounds, the density of people—and it’s likely been this way for thousands of years. Your local expert will show you a 12th-century citadel, the beautiful Alabaster Mosque and an unsurpassed collection of priceless artifacts, including mind-boggling treasures once buried with the boy king Tutankhamen.

Note: Dressing modestly is recommended as a show of respect for the culture and customs of the Egyptian people. In particular, women should ensure that shoulders are covered and legs are concealed at least to the knee on all shore excursions throughout this itinerary.

Prepare to be amazed at the legendary Temple of Karnak, a massive and absolutely astounding site, with gigantic columns, broad avenues lined with stone sphinxes and halls of truly epic proportions. Your local guide is a trained Egyptologist with fascinating insights to share, many not found in any guidebook.

Like its twin shrine, the Temple of Karnak, the Temple of Luxor stands on the site of ancient Thebes, the once flourishing capital of Egypt’s New Kingdom. It was built over hundreds of years and even in ruins, it is still an extraordinary place. You’ll also visit the Temple of Hathor, dedicated to the goddess of love and beauty.

The word “colossal” will take on a whole new meaning after today’s excursion to the gigantic twin statues known as the Colossi of Memnon. And that’s just the beginning—you’ll also visit the temple of one of Egypt’s rare female pharaohs as well as the Valley of the Kings, used as a royal burial place for nearly 500 years and where the mummified remains of Tutankhamen are on display.

Featured Excursion:
Colossi of Memnon, Hatshepsut Temple and Valley of the Kings

After visiting a temple dedicated to a crocodile god today (don’t miss the display of some of the 300 mummified crocs found in the local area), hop aboard a small boat for a bird-watching excursion along the Nile.

Today is an epic day, filled with wonders from start to finish. You’ll visit a marvel of modern engineering—the Aswan High Dam—as well as the Unfinished Obelisk and the beautiful Philae Temple complex, which was moved from one island to another back in the 1970s. But wait, there’s more. You’ll also take a ride in a felucca—a traditional Egyptian sailboat—and enjoy afternoon tea at a famous hotel depicted in Agatha Christie’s novel Death on the Nile.

After dinner onboard this evening, you’ll be treated to an enchanting Nubian show featuring traditionally attired performers, live music and dancing.

Spend the day at leisure or join us for an optional excursion to see the magnificent temples of Abu Simbel.

On today’s excursion, you’ll learn how the Temple of Esna was buried under debris for many centuries and is one of the last great Egyptian temples ever built. Your Egyptologist guide will share all sorts of fascinating insights about this significant cultural site and show you the façade bearing the last known hieroglyphic inscriptions ever recorded in Egypt.

Later, savour the Nile’s majestic scenery as the ship cruises to Luxor.

Featured Excursion:
Sound and Light Show at the Pyramids of Giza

It’s a day of Bucket List Moments today as we venture to Ancient Memphis, a UNESCO World Heritage Site with a number of amazing monuments to see—including the enigmatic Great Sphinx. After seeing the pyramids from afar last evening, you’ll have a thrilling opportunity to view them from an up-close perspective, the only way to fully appreciate their remarkable size and grandeur.

Featured Excursion:
Ancient Memphis sites, including the Pyramids of Giza, the Great Sphinx and Sakkara visit

Check out of your hotel and transfer to the Cairo International Airport for your flight home, or extend your trip with a memorable optional extension in Jerusalem.

Note: Ship schedule and order of sightseeing may change throughout the itinerary. Tour to port of destination by motorcoach and substitute visits to other sites may occur during your trip due to the impact of water levels, closures because of public holidays or other uncontrollable factors.

The S.S. Sphinx will make her debut on the Nile river on January 4, 2020. As the only luxury river cruise ship in Egypt, S.S. Sphinx will offer three gourmet dining venues, including a private dining room and an al fresco dining experience on the upper deck, a swimming pool, massage room and 42 gorgeously appointed suites. Egyptian artwork, fabrics and hand-carved furnishings will bring the beauty of the region to life onboard.

Whether you've visited Europe once or a dozen times, you haven't really experienced the best of Europe until you've sailed with Uniworld Boutique River Cruises. Uniworld offers an exceptional vacation experience free of the stresses associated with today's travel. It combines the pleasure of discovering the multitude of charms and landmarks of different destinations with the same exquisite accommodations, award-winning hospitality, and world-class cuisine of a five-star boutique hotel. Uniworld, the pioneer in elegant river cruising, has been cruising the waterways of the world for more than 30 years. A Uniworld Boutique River Cruise combines the charms and landmarks of different des tinations with exquisite accommodation, award-winning hos pitality, and world-class cuisine of a five-star boutique hotel. Cruise the historic waterways of Europe, Russia, Egypt, China and Vietnam & Cambodia.

Uniworld offers the highest level of comfort, quality and service in river cruising with an unparalleled variety of vacation choices. You’ll cherish this world of benefits designed just for you. CHOICE

Uniworld’s “Six-Star Experience” represents our core value: delivering the highest standards of EXCELLENCE in the six most important aspects of luxury river cruising. EXPERTISE—As a luxury river cruise line, Uniworld handles all aspects of our onboard operations— nautical, hospitality, and culinary. And with the synergy Uniworld shares with their award-winning sister company Red Carnation Hotels, which has over 50 years of experience owning and operating luxury boutique hotels, they have created the world’s ONLY floating luxury boutique hotels. SERVICE—“No request too large, no detail too small” is the credo of the Uniworld staff, who go above and beyond to create an extraordinary experience for their guests. LUXURIOUS SHIPS UNIQUELY DESIGNED—Uniworld’s one-of-a-kind, exquisitely appointed river cruise ships are each a work of art, designed to be as unique as our guests, and as inspiring as the destinations they visit. CULINARY—Uniworld has crafted a culinary experience for the most discerning of palettes to ensure every guest’s dining experience exceeds their expectations. With every meal onboard, guests are treated to a rich selection of complimentary craft and local beers, spirits, and distinctive wines chosen by our acclaimed sommeliers. CHOICE—Uniworld offers more European itineraries than any other river cruise line, and more options for guests to personalize their Uniworld river cruise with innovative onshore programs, including “Choice Is Yours,” “Go Active,” and “Gentle Walking” options. TRULY ALL INCLUSIVE RIVER CRUISING—Uniworld’s true all-inclusive European river cruises are perfectly planned to create the ultimate, stress-free, luxury river cruise experience.

Uniworld has crafted a culinary program for the most discerning of palettes to ensure every guest's river cruise dining experience exceeds expectations. Menus honour regional and seasonal specialties, in addition to offering old-fashioned comfort foods and lighter fare. You'll delight in the wonderful flavours of impeccably prepared meals on our river cruises by our culinary team using the freshest ingredients from farmers' markets and other local sources. And with every meal, be treated to a rich selection of craft and local beers, spirits, and distinctive wines chosen by our acclaimed sommeliers. EPICUREAN ADVENTURER PROGRAM™ Uniworld offers lovers of good food, craft beer, and wine the exclusive Epicurean Adventurer Program™, which is included at no extra charge in your cruise fare. This program is designed to take you deeper into the wonderful world of craft beer and wine, and expand your knowledge of its relationship with food. The Epicurean Adventurer Program is offered on 17 itineraries and includes a host of sumptuous treats.

Write Your Own Comment
You're commenting: Splendours of Egypt & The Nile with Uniworld